Want Your Own Stanley Cup Ring?

I originally saw this on Twitter from the Molson Coors account on April 1, and I just figured it was a bit of a joke. Instead, the joke's on me because it's real! Cases of 24 bottles of Molson Canadian will feature one of twenty different NHL Stanley Cup rings that you can own and, if you're missing a little bling, can wear! Molson's promotional stuff that one usually finds in their cases of adult beverages is usually a little more practical - a ballcap or a t-shirt - but this ring promotion is a completely different twist!

First off, here's the tweet that Molson Coors sent out on April 1.

Price aside, you can understand why I may have thought this was a joke. After all, I don't know how many Molson Canadian consumers wear flashy rings, let alone NHL Stanley Cup rings, but it appears that Molson Canadian is going for something entirely unique in terms of promotional items this year.

Here's a closer look at those twenty rings. 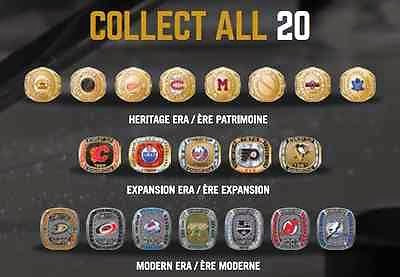 It appears as though the Original Six teams occupy the top row of rings in their historical versions of their logos as opposed to their modern logos. Along with them are the Montreal Maroons and Ottawa Senators to complete the eight-team row at the top. Each of the rings has the year that the team won their first Stanley Cup - Boston in 1929, Chicago in 1934, Detroit in 1936, the Canadiens in 1930, the Maroons in 1935, the NY Rangers in 1928, Ottawa in 1927, and Toronto in 1932.

The second row is deemed the "Expansion Era" which is a poor term when one considers that Edmonton and Calgary weren't actually expansion teams. The Flyers and Penguins were part of the 1967 expansion wave of the Next Six, and the Islanders were founded in 1972. Just like the Heritage rings, each of these five rings has on it the first year that team won the Stanley Cup - Calgary in 1989, Edmonton in 1984, the NY Islanders in 1980, Philadelphia in 1974, and Pittsburgh in 1991.

The final row is the "Modern Era" which, again, is a bit of a poor term since the Modern Era to NHL fans means something entirely different. As you'll see, there is one team in here from that 1967 expansion class in Los Angeles, so there's a few asterisks on these names. Regardless, there are seven rings here with their corresponding Stanley Cup-winning years: Anaheim in 2007, Carolina in 2006, Colorado in 2001, Dallas in 1999, Los Angeles in 2012, New Jersey in 2003, and Tampa Bay in 2004.

Needless to say, if you need some bling pick up a case of Molson Canadian at your local adult beverage store! If you somehow end up with all twenty rings without purchasing them on eBay or Kijiji, I'm just gonna leave this link here. And for goodness sake, don't drink and drive!

Until next time, keep your sticks on the ice!

I have check my local BC liquor store and they haven't heard of this promo. I was looking to buy a case of beer with a ring, but no luck. What a great promo.

Picked a case up yesterday and ended up with the Maroons ring. There decent, alot nicer than I was expecting.

I also checked my local beer store and nothing at all about this promo..
With all the rings I see being sold at other sites ( ebay, kijiji, etc ) I figure employees of Molson got them all and are selling them via the second market..
what a scam...

And while Edmonton could be argued to not be an expansion team, Calgary definitely was, via the Atlanta Flames who joined in 1972.

I can't speak for BC liquor stores, but they were available in Manitoba. Maybe Molson Canadian doesn't sell in BC? ;)

The NHL wasn't founded until 1927. Before then, the Stanley Cup was decided via challenges amongst teams and competitions between league champions.

If you have a complaint, Anonymous, you'll have to file it with Molson Canadian. I thought it was an April Fool's joke at first.

where can I buy there case for the rings

Hi Glen. It would be at your local adult beverage shop. I don't have any information other than that. Molson would be your best source if your local shop doesn't carry the cases.

I live in BC and went to all the beer stores. They have a contest to win a whole collection, but no cases of beer have a ring included. All the 24 packs have nothing. Disappointed!!

We don't get bottle 24 packs in BC

Sorry, guys. I'm just the messenger. I have no affiliation with Molson nor am I beer distributor. Demand more from your local stores (or invade Alberta)!

At my store in BC the rings are on a display case. Also some at the till to give to customers. They are really nice rings! NHL started in 1917 teebz. Too bad Van Millionaires missed out!

You are entirely right, Glen. I fat-fingered that one well. LOL

I can't believe Molson screwed over an entire province.

I just won the case and rings at my local (BC) Beer & Wine store. What are they worth ?

Congrats, Snuffy! As for their worth, I have no idea. It appears that they go for between $25-50 per ring on average.

They have them in Victoria's BC liquor store.....

I bought a case of Molson Canadian in the Evening hours today and told my 2 sons to open up the box to find a cool NHL Ring but None was found ? Is this a real often occurace ?
What do I need to do to get a Ring
Replaced ?

Hi, Anon. Sorry to hear about the missing ring, but you'll have to call Molson about that. I'm just a blogger. :o)

They keep the rings @ the cash register, not in the case.

I visited my local liquor store and nothing was found. What an amazing promotion. Hopefully I can find it soon.

I actually won the whole set if anyone is interested in purchasing! !

Why do you have to be of legal drinking age if there is tge statement, "No product purchase is necessary"? Just wondering if any minors have challenged this?

I may be interested. What do you want for them?

Here in windsor ontario the rings are in the promo 28 boxes bottles.. so 4 free beers and a ring :-)